New outfit for a state bank 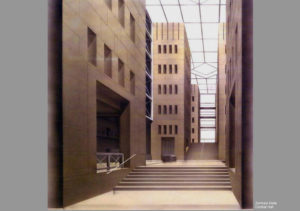 Georg-Maria Hagemeyer has used the job to “Redesign the Public Hall of the state bank headquarters” as a challenge to create a grand and spacious concept for the whole building in a style typical for him. The plans call for the public hall to be enlarged to include all floors, and split up into functional units. The draft for this project was awarded a prize for exceptional achievement by the Association of German Master Builders, Architects and Engineers.

The main building of the “Württembergische Landesbank  (State of WOrttemberg Bank) in Stuttgart were built by the bank in 1929. The original glass roof at first floor level was replaced in the seventies by a low concrete ceiling and the public hall lit with electricity.

Georg-Maria Hagemeyer’s plan proposes a comprehensive and homogenous design for the office storeys, the public hall and the facade. The facade is under a preservation order; its cubic forms and different materials have had considerable influence on the new design.

The main focus is however on the fundamental improvements to the public hall. Bank customers and visitors to the public hall should be aware that they are in the center of a bank which is first and foremost a service provider. The building encircles the public hall. This is achieved by enlarging the main public hall on the horizontal, as well as on the vertical to encompass all storeys.

In front of the main hall there is a self-service area open to the public 24 hours a day for all current and future banking machines. The emphasis here lies unmistakably on the bank’s orientation
towards the future.

The main hall is divided into the lower, customer service hall and the upper hall, which is somewhat further back and accommodates customer advisory departments requiring a little more discretion.
The hall is an experience in itself, with ever-changing views and revelations. A seemingly lightweight construction of steel and glass stretches between the towers, which are faced with the same marble
as the facade, and counterbalances their massive presence.

The interplay of closed and open spaces, conf inement and expansiveness, solidity and filigree , imposing staircases and charming niches , makes for a powerful, intensive architectural experience.
Specially designed furniture blends in well so that everything, from the outer shape of the building to the smallest detail of furnishing, speaks the same language.