German Architecture Award for the Market Hall redevelopment in Goettingen 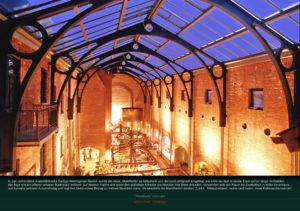 Architect Georg-Maria Hagemeyer has good reason to be pleased: His Restoration of the Market Hall in Goettingen was acclaimed “exemplary” in a competition open to architects from all over Europe. His and other winning entries are being exhibited on a European tour.

“Restoration today – ideal and reality” was the theme for this year ‘s “German Architecture Award” which, for the second time, was open to entries from all over Europe. The international jury was looking for projects which had been restored with due respect for the existing structure of the original building whilst deriving their special quality from the tension between old and new.

After considering almost two hundred projects the jury decided that Hagemeyer’s restoration of the market hall, completed on December 7th 1989, should be awarded the title “exemplary”.

Eleven of the commended entries are meanwhile touring Europe in an exhibition: Dresden, Prague (until October 28th) and Augsburg are the first stops, where the Market Hall and other exhibits can be seen.